Home
Products
News
About Us
Contact Us
Order Info 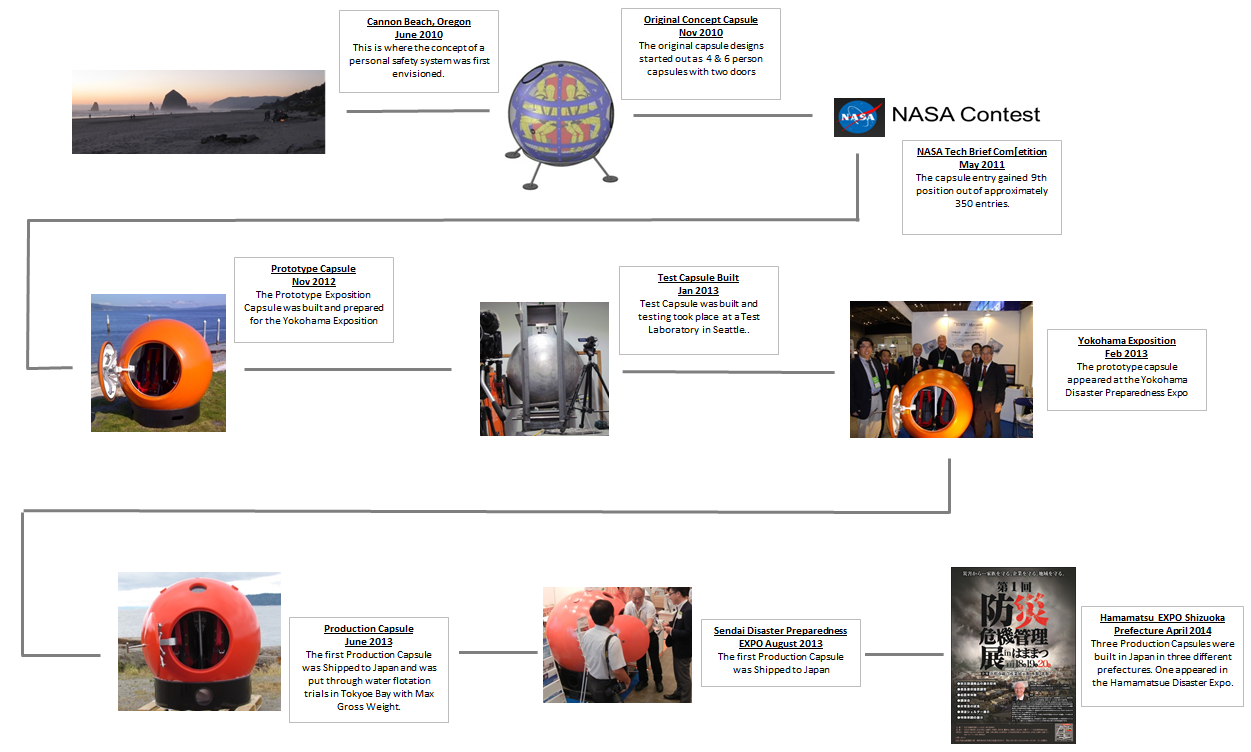 The concept of a personalized safety system against the threat of a Tsunami was first envisioned by Julian Sharpe while spending the weekend at Cannon Beach, Oregon, with his family. The memory of the 2004 Indonesian Tsunami, which took the lives of approximately 225,000 people, was relatively fresh in his mind.

On returning to the office of IDEA International the following Monday, Julian shared his idea with his colleague, Scott Hill, who happened to be quite impressed. The two of them proceeded to develop a fully working design concept, performed some initial structural analysis and converged on a functioning design.

Julian and Scott then decided to enter the design into the 2011 NASA Tech Brief Innovation Contest. The entry resulted in the capsule being voted 9th out of about 350 entries. This result spurred the two on and resulted in some media attention. Local media heard of the design and became long term advocates of the project.

As a result of the media coverage Scott and Julian were introduced to Dr. Eddie Bernard, a 40 year veteran of Tsunami research and former member of NOAA. Dr. Eddie was highly impressed with the concept of a personal safety system and shortly thereafter the company was born, Survival Capsule LLC.

Dr. Bernard happened to have been working with Toho Mercantile from Tokyo, Japan and was very well acquainted with the President of Toho. Through Dr. Bernard, Toho was introduced to the Tsunami Capsule.

Both events went extremely well and as a result Survival Capsule has now built its first Production Survival Capsule which shipped to Japan on the 26th of June 2013 with ten (10) more to follow in September 2013.

Julian Sharpe earned his degree in Aeronautical Engineering and Design from Loughborough University of Technology in England and has 27 years of aircraft and space industry experience. more >>
His career has allowed him to live and work in many different countries, including Canada, Italy, Germany, the Netherlands, and the U.S with companies such as British Aerospace, Agusta/Westland Helicopters, European Space Agency/ESTEC, Bombardier, DRA Boscombe Down, Telair, Boeing, and Aermacchi. In 2007 he started his own business, IDEA International (Innovative Design Engineering and Analysis), which operates contracts on a global scale and has grown to include a business partner, Scott Hill, and ten stress analysts. Julian first visualized the Tsunami Capsule whilst vacationing on the Oregon Coast with his family in 2004. It was not until the full horrors of Sendai on March 11, 2011 that the capsule design was transformed from concept, sketches and rough calculations to a detailed design and 3D CAD model with the expert help of Scott Hill. At this point, Scott and Julian realized they had a device which could potentially save thousands of lives.

Scott began his career with a degree in Mechanical Engineering from Washington State University followed by work in aerospace with the Boeing Company (Everett, WA). more >>
From his work on the 747, 757, 767, and 777 Boeing aircraft models, he has earned significant expertise and experience in design and stress analysis. Scott has also worked as a high-pressure design engineer for environmental control systems and has become highly proficient with installation/assembly/detail product structure development, 3D modeling programs, drafting, and Aerospace design requirements.

Dr. Eddie Bernard is a subject matter expert and consultant on issues dealing with tsunami warning systems, tsunami mitigation and education programs, and tsunami research.more >>
Dr. Bernard is currently an Affiliate Professor at the University of Washington and Scientist Emeritus for the National Oceanic and Atmospheric Administration’s (NOAA) Pacific Marine Environmental Laboratory (PMEL). He retired from Director of PMEL in 2010, after 40 years of NOAA service. In recognition of his outstanding service, he received three Presidential Rank Awards from Presidents Clinton, Bush, and Obama. As a noted oceanographer and expert on tsunamis, Dr. Bernard has published over 85 scientific papers and served as editor for three tsunami books. He has also produced a scientific movie on tsunami research and has been featured in over 20 television specials on tsunamis, including programs on The History Channel, The Learning Channel, National Geographic, and interviews on national television news programs. 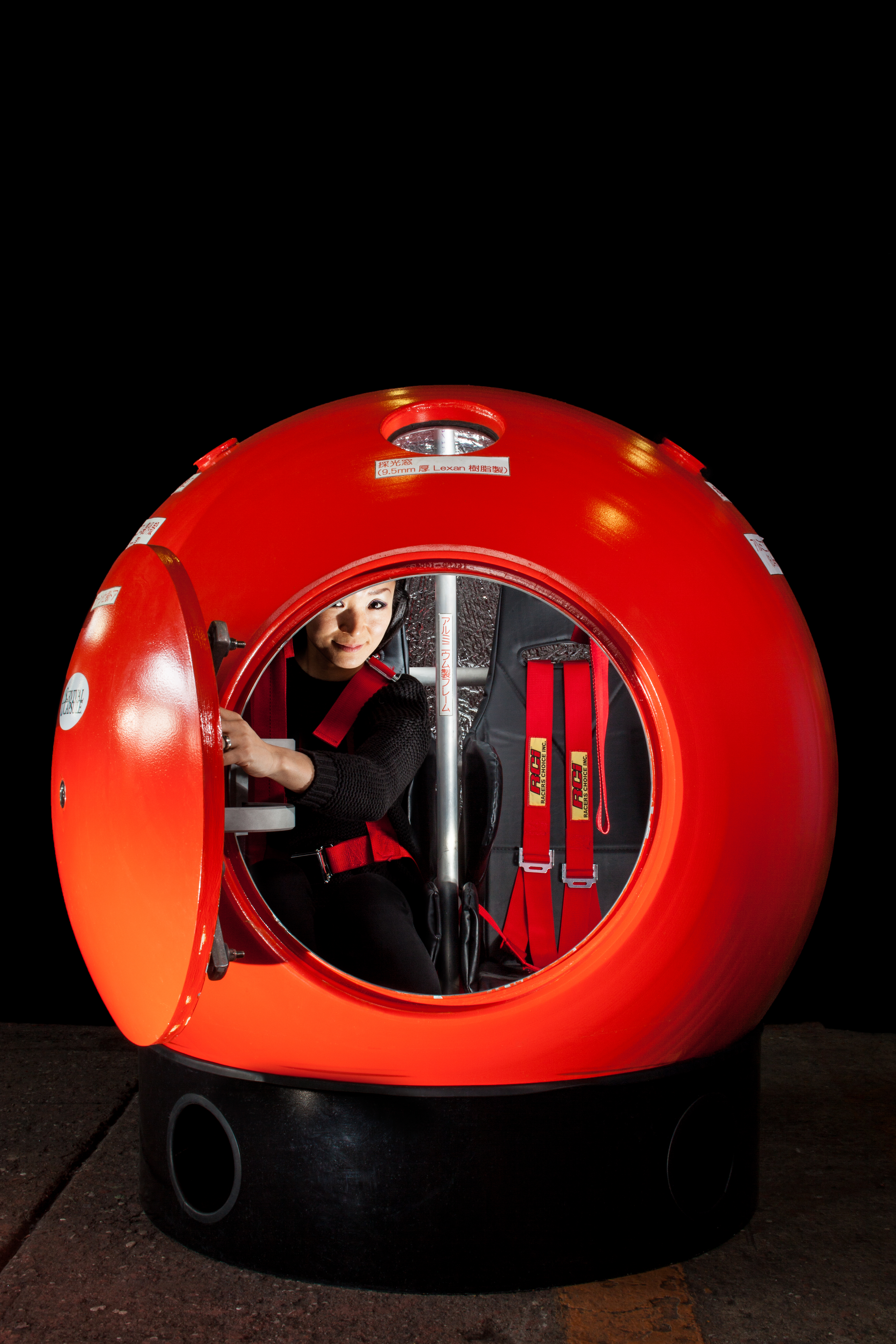